Someone please kick the PS3GRID server....

I found out what is going on.

The problem is due to another website hosted on the server.

The admin of PS3GRID cannot do anything until Monday as he does not have root access.

Thanks for the update. I'm sure I caused it by finally getting a PS3 (due to the price drop)...
Reno, NV
Team: SETI.USA

Now running BOINC on the PS3 is much easier! No linux install required, just a USB thumb drive. 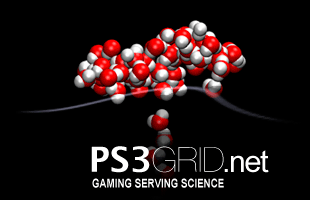 I just can't stand it anymore. . . it looks like yours truly will join the ranks of the PS3 game console BOINCers. . .

I am just barely Linux literate and would plead with those who are currently running PS3Grid to share their wisdom so I can get my 11 y/0's PS3 crunching BOINC projects slick and easy.

News from GDF about the ps3grid/gpugrid server outage -


The server is down. I don't know what's wrong, and I am not going to know until Monday morning because the server is not were I can access on Sundays. They were doing electrical works on Monday, maybe they have messed something up.
Hopefully, people will have enough wus till then.

I am just barely Linux literate and would plead with those who are currently running PS3Grid to share their wisdom so I can get my 11 y/0's PS3 crunching BOINC projects slick and easy.


I think that this has been mentioned on another thread, but PS3Grid has a boot image for USB thumb drives. Sony is really good about making the PS3 developer accessible (they put a lot of effort into touting the Cell processor and "more than just a game console" image, and it's paying off), and there is an option to boot off removable media in the menus. (Make sure you have the latest operating system updates, also easily done through the menus.)

I looked into Yellow Dog Linux for the PS3, but the default video is HDMI, not available on my dinky TV.... There is also supposed to be a Fedora Core build for PS3, but I've never actually seen it.

The PS3 actually has the Folding@Home client built-in. It defaults to a generic account, but you can change it if you have an existing account. My PS3 pushed me back down into the top 10K. F@H is a worthy project. They have published 57 articles in peer reviewed scientific journals so far.

My F@H stats: http://fah-web.stanford.edu/cgi-bin/main.py?qtype=userpage&username=Karapcik
One core on an AMD Athlon 4200+ x64 (Fedore Core Linux), one core on a G5 PPC Mac, and the PS3 (running advanced mode).

02-01 10:40
Laird of the wee White Hoose: Recovering. It's normally something, I do with a Land-Rover. My advice to you; stay single. -A single malt and single glass
02-01 05:22
Stacie: @Laird best part of a hangover is if your Partner is hungover also, you can spend most of the day in bed together recovering.