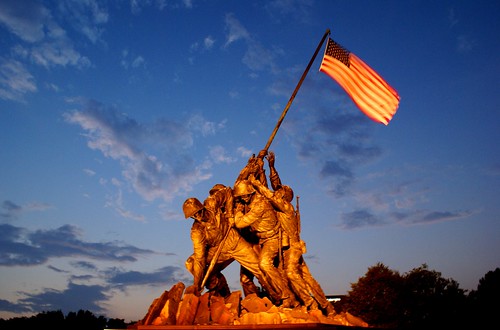 Marine training has no false sympathy or feigned understanding. When given a job.. you do not leave the post until it is done. I was told by my bosses that this is the reason I was hired over other applicants.

The emphasis placed on values is also something that has a very long half life. Current day Marines carry value cards that they are issued and they sign. The front has the standard Honor, Courage and Commitment and the back the states that Marines lead by example, respect themselves foremost, place faith and honor above all else and give allegiance to God, Country, Corps and Family. How can you go wrong with that value system in your pocket?


Some people spend an entire lifetime wondering if they make a difference in the world. But the Marines don’t have that problem.
--Ronald Reagan 1985


There are only two kinds of people who understand Marines, Marines and the enemy. Everyone else has a second-hand opinion.
--General Thornson, U.S Army


The Marines I have seen around the world have the cleanest bodies, the filthiest minds, the highest morale, and the lowest morals of any group of animals I have ever seen. Thank God for the Marine Corps.
--Eleanor Roosevelt 1945